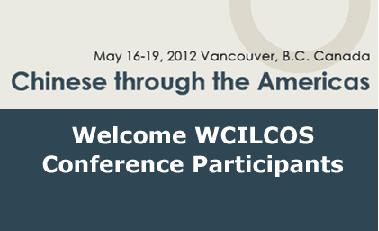 The WCILCOS (World Confederation of Institutes and Libraries in Chinese Overseas Studies) is a federation established by participating institutes and libraries in a Chinese Overseas Studies conference in Athens, Ohio, in 2000, to facilitate co-operation between scholarship and documentation, and between institutes, libraries, and archives in different parts of the world. Registered in Ohio, it is non-profit and non-political. No membership dues are collected. Since the inception of WCILCOS in 2000, the Dr. You-Bao Shao Overseas Chinese Documentation Center has served as its secretariat, and devoting its resources to the Confederation’s goals and visions.

The WCILCOS conference was held May 16-19, 2012 at the University of British Columbia’s Point Grey campus with 150+ international delegates in attendance.

It was the ‘first time UBC has been invited to host the WCILCOS Conference, and the first time it has been hosted in Canada. Eleanor Yuen, Head of UBC’s Asian Library, has helped organize WCILCOS conferences since 2003’.

We hope you will take a few minutes to peruse the new WCILCOS conference papers collection in cIRcle at: https://circle.ubc.ca/handle/2429/43391.

An electronic copy of the Register of Chinese Immigrants to Canada was preserved at Library and Archives Canada (LAC) in Ottawa. It was created between 2005 and 2008 as part of a research project on immigration from China to Canada directed by Professors Peter Ward and Henry Yu of the Department of History at the University of British Columbia. See this popular cIRcle item which has had 500+ views in the History Faculty Research collection at: https://circle.ubc.ca/handle/2429/36347.

Above partial excerpt in italics and image are courtesy of the UBC Library website at: http://about.library.ubc.ca/2012/05/15/ubc-library-welcomes-wcilcos-2012/.