In the Spotlight: Prince George, BC – an interdisciplinary research-based narrative profile 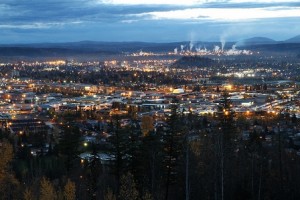 Touted as the ‘fourth largest city in the province, the largest in the north, and considered as the Northern capital of British Columbia’, Prince George has a fascinating history with a . Learn about how it has developed into “a northern hub follow[ing] the traditional migratory paths of British Columbia’s Aboriginal peoples, specifically the pathways within and across the Dakelh people’s territories.”

Read a narrative profile of the socio-political and historical context of the community of Prince George developed as part of the EQUIP Healthcare’s “five-year interdisciplinary research program designed to promote health equity for marginalized populations through innovative equity-oriented interventions”.

We are pleased to present this archived report and look forward to making other EQUIP Healthcare interdisciplinary research-based narrative profiles of other BC communities openly accessible via cIRcle, UBC’s Digital Repository in the future.

In the meantime, explore a plethora of UBC Faculty Research and Publications covering over 1900+ topics at: https://open.library.ubc.ca/cIRcle/collections/facultyresearchandpublications