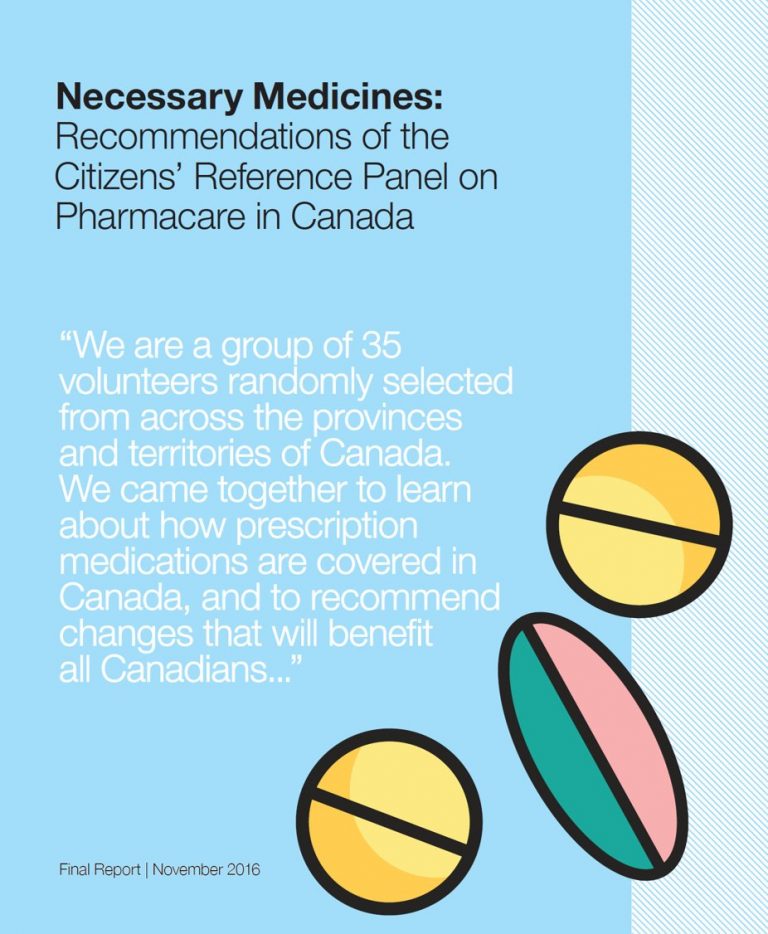 It is a pleasure to announce that the Citizens’ Reference Panel on Pharmacare in Canada report is available in cIRcle, UBC’s Digital Repository!

The report was created by a group of 35 volunteers who were randomly chosen from different walks of life, that is, in terms of their ages (ranging from just 15 months to over 65 years’ old), languages and geographical locations in Canada.

Their objective was to “learn about how prescription medications are covered in Canada, and to recommend changes that will benefit all Canadians”.

Much urgency is behind their recommendations tied to actionable steps which need to be addressed and dealt with due to the number of Canadians ‘who are suffering and dying under the current system which does not meet their needs’.

With Canada’s population aging on the rise along with emerging needs as a result, the Citizens’ Reference Panel on Pharmacare in Canada founding principles are briefly listed below:

A national pharmacare system must be a universal program for every Canadian.

Decisions regarding the inclusion of specific medications in a formulary under a national pharmacare system must be based on evidence.

A national pharmacare system must ensure an active role for patients, placing their priorities and interests at the core of their care, regardless of their ability to pay.

A national pharmacare system must be long-term and durable — it must endure for future generations. Its financial sustainability relies on independently monitored fiscal responsibility.

A national pharmacare system must be accountable to Canadians.

We would like to thank Dr. Steve Morgan and all of the contributors involved for sharing this report with the UBC scholars, community and general public in Canada and beyond.